Germany's only museum about the Old Trade Route Frankfurt-LeipzigMuseum Steinau

Steinau owes its byname "an der Straße" (on the route) to the trade route between Frankfurt am Main and Leipzig an der Pleiße, for centuries the major west-east-axis of the Holy Roman Empire.
The trade route affected Steinau considerably. Good and bad times, war and peace left their traces. Countless people travelled along the road, thus passing the town. They had to spend the night, had to have their carriages repaired - and carried their impressions of Steinau with them on their long journey.

The museum was set up in the former court house barn. The court house (today Museum House of the Brothers Grimm) used to be the administrative centre for the district Steinau and Schlüchtern. Here the lawyer Philipp Wilhelm Grimm worked as Magistrate and lived with his family from 1791-1796. Therefore the barn was a favourite playground for his children, including his sons Jacob and Wilhelm, who used to become world famous linguists and collectors of fairy tales, as well as his son Ludwig Emil, painter and graphic artist of the Biedermeier. How high the Grimm children aimed, even when playing, becomes still obvious looking at the object of their special interest: the barn ladder appears to be endless.
Four films report on the development of Steinau, on municipal areas, condition of the streets, administrative centre, farming milieu as well as craft and trade.

The town, the history, the characters

The importance of Steinau grew with the amount of travel along the trade route Frankfurt-Leipzig. To travel from Frankfurt to Steinau you already had to cross several borders, the German Empire resembled a patchwork rug. The historical boundary stones can tell a story.

In the 16th century the little castle built to protect the road was changed into a stately palace. This Renaissance palace became a centre. Prosperity, however, still depended on the trade route. People came to Steinau and left again, for a shorter or longer period. For many people Steinau even became a station on their path of life. Professional and social positions of some characters illustrate this.

Almost everybody who travelled through the Empire used the route from Frankfurt to Leipzig, emperors and kings, beggars and whores, artists and philosophers as well as salesmen or a pilgrim on his pilgrimage. Today you can cover the distance easily in three hours by train. It was totally different by coach, when you were on your way for a fortnight and needed a lot of utensils to endure the journey comfortably, starting with provisions, the means of protection, ending with the money you had to carry with you. Bettine von Arnim was not the only one who could tell a story ...

Steinau an der Strasse - repairs and recreation
Wainwrights, blacksmiths and saddlers dominated the crafts in Steinau. This is not surprising as people entered the town with their carriages and animals every day and had to stay the night in one of the numerous guesthouses, one in almost every second house, while their carriages had to be repaired, the horses to be shoed. They could even buy a new coach, as a prospering carriage factory had established itself in Steinau.

Travelling - an adventure
If you look at the stone in front of the museum showing carved in cart tracks you realise how necessary carriage factories were. Here the strain of travelling becomes very obvious. You can also see how much the mode of travelling has changed within the last 150 years. While a traveller of the early 19th century had to spend the night in the safety of Steinau, only twenty years later he just passed the town by train.

There is evidence for the pottery craft in Steinau and some of the surrounding villages since the 14th century. The potters' products found their direct way to customers via the trade route. Finds from medieval times and from the 17th century demonstrate the development of regional pottery. The variety of forms and patterns in the 19th century is presented, as well as several outstanding pots. You can also listen to an old lady from Steinau talk about the "Pfingstinsel", a very special Steinau jug.

A film shows the making of a pot with a screw top which is almost exclusively produced in Marjoß. A specific characteristic of Steinau's potters is the fact that they made earthenware as well as stoneware. The museum accommodates a lot of room for these stoneware products.
In the early 20th century, however, sales opportunities for rural pottery decreased. What remained were handicraft pottery and stove tile production. Some splendid art nouveau stoves came into being in Steinau.

Opening hours
From 2nd January to Sunday before Christmas, daily from 10:00 to 17:00 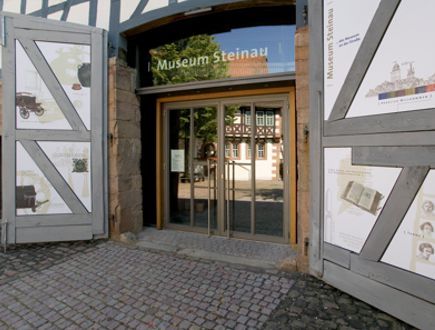 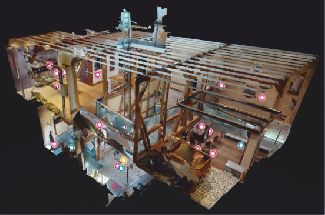